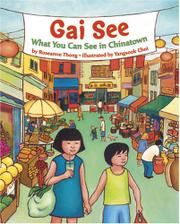 What You Can See in Chinatown

Bland, static and usually suspended against monochromatic backgrounds, Choi’s uncrowded street scenes depict a four-season walk through a generic (though, to judge from the title, probably American) “gai see”—Cantonese for “street market”—devoid of any feeling of bustle or vitality. Thong’s rhymed text doesn’t exactly explode with life either, as her androgynous young narrator answers the repeated rhetorical question, “What in the world / could you possibly see / at an old gai see . . . ” by focusing on a few distinctive foods and goods, from “oodles of noodles” and live seafood to “paper money / burned for prayer / to show ancestors / that we care.” Ending with an abbreviated New Year celebration, plus a closing invitation to readers to chime in with observations of their own, this offers informational dribs and drabs, but neither the strong atmosphere of William Low’s Chinatown (1997) nor the engaging personal voice of Kam Mak’s My Chinatown (2002). (Picture book. 7-9)