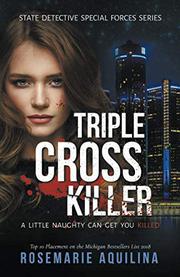 Detectives in two U.S. states pursue a serial killer who sees himself as a savior of domestically abused children in this thriller.

Detroit resident Rita Rose has good reason to avoid a romantic relationship. Her ex-fiance, Dr. Zeke Fazul, after committing vehicular homicide, tried to frame Rita by putting her unconscious body behind the wheel. Cleared of official charges, she’s now slowly recovering, thanks in part to her best friend, Detective Jacqueline McSween. Jaq helps Rita find a job as a medical examiner’s assistant and encourages her friend to date again. Soon, Rita meets an airline pilot, Nick Archer, and the two hit it off. Unfortunately, readers know the relationship is already doomed as Nick is a murderer. With access to children’s letters to Santa, Nick zeros in on the kids who write about some form of abuse. He targets individuals responsible for tormenting loved ones, and his M.O.—victims left with broken necks and handmade rosaries—quickly alerts Jaq and her partner, David Maxwell, to a serial killer in the area. At the same time, Nick’s flights frequently take him to Sarasota, Florida, where he tracks down other abusers. The investigating Sarasota detectives, Abel Mendoza and Ronald “Rabbit” Randall, likewise spot similarities among the murders. The two detective teams aren’t initially aware of each other. Meanwhile, an exuberant Rita grows closer to Nick. But his unsavory side gradually emerges, as he’s controlling and prone to reciting biblical passages at odd times. With luck, Rita will uncover more about Nick before it’s too late.  Aquilina (Feel No Evil, 2003), a Michigan circuit court judge, aptly establishes her story as a procedural. For example, the detectives’ periodic discussions at crime scenes or the medical examiner’s table ultimately help them form a profile of the killer. The author also uses these procedural elements for consistent character development. Jaq and David, for example, are hiding an intimate relationship that violates department policy while ME Dr. Towers is a mentor and father figure to Rita. Accordingly, Aquilina’s prose is a solid fusion of police/medical jargon and banter among co-workers and friends. But even with meticulous murder investigations, the ongoing cases aren’t always enlightening. Jaq has a running theory that the killer is inspired by the 10 plagues of Egypt (for example, killing a firstborn or putting lice on a victim). But this ultimately provides no further insights, as the premise involves some earlier murders and suggests ritualistic and religious aspects that the handmade rosaries have already implied. Regardless, Nick and Rita prove to be intriguing characters on their own as well as together. Though Nick is offing bad people (whom not all family members are sad to see go), he’s unmistakably disturbed. Knowing he’s a killer makes his scenes with Rita relentlessly tense, especially when his domineering manner crops up. Rita’s decision to stay with Nick, despite her increasing wariness, is believable: her behavior is akin to that of a battered woman. Indeed, Nick’s treatment of her is psychological abuse. Notwithstanding readers’ knowledge of the killer’s identity, there’s an effective twist near the end.