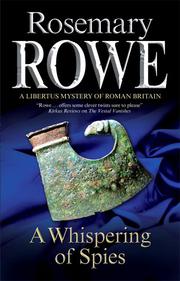 A WHISPERING OF SPIES

A favor for his wealthy patron puts a Roman citizen of Britain in a dangerous predicament.

In A.D. 191, when Britain has been a Roman province for over 200 years, ex-lictor Voluus plans to make the city of Glevum his retirement home. The wealthy but ill-tempered retiree has already hired an apartment and bought property to build a house for his family, none of whom have arrived. Pavement-maker Libertus is sent by his powerful patron Marcus Septimus Aurelius to seek information about the new arrival by offering his services to Voluus’ steward Calvinus. After his visit, one of the carts carrying part of Voluus’ treasure is found empty, and all the guards and even the horses have been slaughtered. Members of the council who have had spies watching Voluus’ household accuse Libertus of the crime. All the spies’ information may be open to interpretation, but Libertus has a difficult time explaining it away. He’s arrested and held by the commander of the local fort, who’s had dealings with Libertus before and is so disposed to believe him that he takes him to the scene of the crime, where all is not as it seems. With his adopted son and a slave of Voluus’ doing some of the investigating, Libertus must find the actual criminal or face exile under Roman law.