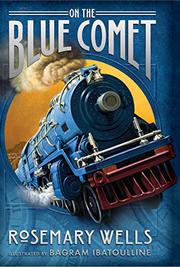 ON THE BLUE COMET

Time travel hurts. Eleven-year-old Oscar Ogilvie, Jr., first discovers this when he—dodging bullets in an armed robbery—belly-dives into a model train layout at the First National Bank of Cairo, Ill., on Christmas Eve 1931 and, miraculously, finds himself aboard a real train headed for California with the dashing future president “Dutch.” Next stop: Oscar is a strapping 21-year-old in danger of being the first fifth grader drafted into the U.S. Army! Oscar’s top-notch at any age, and his close relationship with his father (a fellow model-train fanatic) is the heart of this buoyant, mostly Depression-era romp. Abundant historical and literary allusions—and a cast of real-life characters from Joan Crawford to Alfred Hitchcock—enrich the story (though they may be lost on some). Even when the novel teeters on didacticism’s edge, readers will be disarmed by Oscar’s compassionate nature, amused by his colorful, well-sketched friends and captivated by his “Triumphs and Disasters” (from Kipling’s poem “If,” affectionately referenced). Ibatouilline’s full-color, atmospheric Norman Rockwell–like vignettes enhance the nostalgic feel of this warm, cleverly crafted adventure. (Historical fiction/time travel. 11 & up)