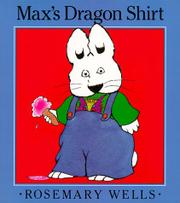 From the Max & Ruby series

Hooray! Max is back, again giving bossy older sister Ruby her comeuppance just by going his own sweet, imperturbable way. Ruby has just five dollars to buy Max a pair of much-needed pants. Max remarks quietly that he prefers a dragon shirt; Ruby points out in her usual tactless manner that Mother's directions were explicit and there won't be enough money. Then she gets involved in trying on dresses; Max doses off, wakes, wanders down to Boys' Sportswear and tries on the coveted shirt, finds himself lost, and is comforted by two policemen and some multicolored ice cream, which he gets all over the shirt...Meanwhile, Ruby finally misses him, pursues her own distraught itinerary, and arrives to find that the shirt is now Max's by default. Deliciously witty, with Wells also capturing every nuance- -and satirizing the department store and its denizens—in her delightful illustrations. Totally satisfying. (Picture book. 3-8)