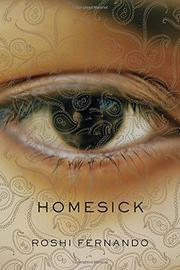 A series of loosely concatenated stories focusing on the lives of first and second generation Sri Lankan immigrants in England.

The eponymous opening story introduces us to a large cast of characters, most of whom will play significant roles in later stories. The occasion for bringing everyone together is a 1982 New Year’s Eve party at Victor and Nandini’s home. Preethi, one of their three children, plays a particularly prominent role as we move through the book, for Fernando traces the vagaries of her romances, her marriage and her relationship to her own children. At the party, in an achingly honest response to the notion of their living out their dreams, Victor cries, “We belong nowhere...But if we belong anywhere, it is here. I have chosen here.” The desire to find a home indeed drives many of the characters, for they try to settle down, sometimes with the dreaded “white fellows” feared by Nandini’s brother. “Sophocles’ Chorus” explores the first love relationship of the 17-year-old Preethi and Ollie, a golden “boy-man” all of the girls aspire to. He casts a shadow over Freddie, who’s a great friend of Preethi’s but who yearns to be more. In a later story we learn that Preethi’s brother Rohan is struggling with his sexuality, for he feels attracted to both men and women. In “Honey Skin” we meet the 80-year-old Dorothy and discover she recently lost her husband, Hugo (who briefly appeared at the New Year’s Eve party), but still misses the sexual connection she had to him even though for years she’s fantasized about women. The penultimate story, “Meta General,” informs us that Preethi’s husband has lost his job, a victim of the 21st century economic downturn, while the final story focuses on the loss of a beloved aunt.

Fernando writes expressively and finds an appropriate emotional correlative to convey a variety of tones, from nostalgic to tragic.