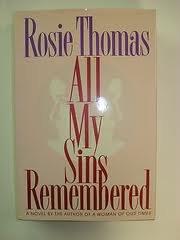 ALL MY SINS REMEMBERED

A sizable English period romance by the popular Thomas (A Woman of Our Times, Bad Girls, Good Women, etc.), in which the cousins, joined by blood, do battle and then make up during the years of war (WW I and II)—through love and lust, domestic coziness, and political upheavals—until the close, when there's a veritable buckshot blast of doom. ``Grace and I are like...weight and counterweight...faces reflecting each other, but our souls [are] immiscible.'' It is the avant-garde painter known simply as ``Pilgrim'' who is hired (reluctantly) by Grace's father, the stuffy Earl, and her mother, Lady Blanche, to paint Grace and her cousin Clio when they're in their early 20s. The painting, The Janus Face, shows two beautiful women joined at the hip but straining away from each other. But while Pilgrim is busy between brushstrokes, Grace moves in on him (another of Clio's infatuations) and later discovers that she's pregnant. She'll marry failed-writer Anthony, however—a man whom she, at first, does not love and who will never know that daughter Cressida is not his. Meanwhile, Grace will love her husband, finally, and after his death, enter politics and become an MP. Through it all, the Hirsh family (kind professor Nathaniel, Clio's father, married Lady Blanche's twin), so busy and intellectual, are growing up: Jake and Julius become a doctor and famous violinist, respectively; Alice turns into a nasty little Nazi; Tabitha becomes a nun, and Hugo sensible landed gentry. Clio made a truly stupid marriage, but eventually meets true love—German Jew Raphael— before the war. At the end, there's a trio of shocking deaths, and, in the present, an ancient Clio remembers.... A fat, shrewdly formulaic pastime with English country- house/cafe lures. Competent lubricous romance. (Book-of-the-Month Dual Selection for September)