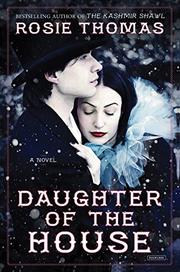 DAUGHTER OF THE HOUSE

British author Thomas (The Illusionists, 2014, etc.) brings back the Wix family, entertainers who own London’s Palmyra theater, and focuses on the daughter’s story in this historical romance set in the early 20th century and beyond.

Since surviving the sinking of a pleasure steamer during a family excursion, psychically gifted 13-year-old Nancy Wix occasionally sees images of a young victim. Worse, rescued passenger Lawrence Feather pops up at random times, intent on convincing Nancy to channel her powers and communicate with his beloved sister, a passenger who drowned on the cruise. Nancy’s repelled by him and uncomfortable that he recognizes her connection with the Uncanny (as she calls the supernatural world), something she’s never revealed to her parents. Her mother, Eliza, is frail, and her father, Devil, is always busy scheming to keep the Palmyra afloat. Her parents’ relationship is stormy, but the two remain devoted to one another; Nancy, though, often feels alienated from both. They focus their efforts on younger brother Arthur’s future by enrolling him in elite schools and encouraging him to mingle with the upper class. Nancy knows her parents have no such hopes for her eldest brother, Cornelius, or herself, but she’s determined to follow her own path. In her 20s, she becomes involved with Feather's godson, Lion, but abandons conventional expectations to be with the love of her life, wealthy businessman Gil Maitland. Nancy also finds herself slipping into the role of parent while her mother and father become mired in destructive behaviors. To help keep her family afloat, she seeks out Feather—who uses his own weak psychic abilities and knowledge of human gullibility to conduct séances for paying audiences—becomes his student and protégé, and then leaves him to establish her own show at the Palmyra. Thomas focuses more on plot development and characterization in her current offering than she did in the prequel, and she almost manages to pull off an absorbing historical romance. She creates a dynamic protagonist involved in an uncertain romance, and her other principal characters are equally well-rounded. But her heavily ornate style of writing, combined with long superfluous passages and terminology unfamiliar to many readers, detracts from the overall quality of the story.

Rather sloppy, but Thomas fans may embrace this latest effort.