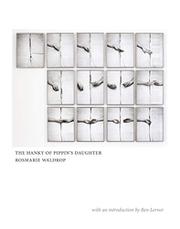 THE HANKY OF PIPPIN'S DAUGHTER

A reissue of a 1986 novel by Waldrop—an acclaimed experimental poet who was born in Germany in 1935 before immigrating to the U.S. in the '50s—which carefully braids a family’s decline with the rise of Nazi Germany.

Lucy, the narrator of this haunting, distinctive novel, is writing to her sister—or perhaps half sister—Andrea with family history much on her mind. Their mother, Frederika, married Josef, a teacher and World War I veteran, in Germany in 1926, but within months she was pursuing an affair with Franz, leaving the identity of the younger girl’s father uncertain. Beyond complicating the family tree, the infidelity has messed with everybody’s psyches, or at least that’s Lucy’s assertion. Andrea retreated into a convent; her twin sister, Doria, escaped to start her own family, and Lucy feels she’s inherited mom’s penchant for affairs. Lucy is trying to pinpoint the root of this dysfunction: The novel’s convoluted title refers to a dropped handkerchief that landed in Kitzingen, her family’s hometown, a symbol of the impact of a single arbitrary event. The sense of arbitrariness and dysfunction is mirrored in Lucy's recollection of German history. If Frederika had put her foot down more about listening to Wagner, might things have been different? Did the fact that Franz is a Jew further stoke Josef’s enchantment with Nazism? “Can I possibly isolate any one particular event as the cause of other particular events?” she writes. “Construct a different family myth out of one little sentence?” Lucy presents a cool intellectual facade, but the novel is littered with spikes that suggest an inner fury—most clearly in the all-caps section headings: “AM I TAKING MOTHER’S SIDE?”; “LATER, YOU GO INTO CONVULSIONS”; “DO YOU NEED ME TO REMIND YOU THAT THE NAZIS GAINED VOTES?” As the political betrayals in Josef’s world intensify, she creates a crushing sense of Lucy’s feeling burdened by family and country alike.

An unconventional but effective take on the legacy of Nazism.