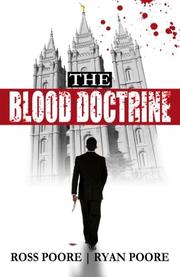 The Poores, a father-son writing team, craft a novel that revolves around a murder investigation, though it’s more so an extensively researched exploration of religion and hate crimes.

One September morning in Utah, James gets the latest in a string of visits from Elder Lee and Elder Jenkins, a pair of Mormon missionaries. James’ revelation that he’s gay gets the missionaries to leave him alone. Lee says he thinks the world would be better off without homosexuals, and Jenkins calmly tries to rebuke him, reminding Lee, “They are still children of God and the Lord does love them.” The next morning, James’ partner finds him on the couch, his throat slashed. Detective Klingensmith is put on the case, and he can’t get the question out of his mind: “Why would a missionary commit murder?” To answer this question, he crisscrosses Utah and delves into some of the more obscure doctrines of the Church of Latter-day Saints, which the Poores back up with meticulous research and citations. In their preface, the authors write, “No religion wants the most outrageous atrocity in American history [the Mountain Meadows massacre, in which a Mormon militia slaughtered over 100 emigrants] shared with their adolescent members, especially the LDS church,” so readers might not expect a nuanced, fair portrait of Mormonism. Thankfully, though, most of the religion’s representatives here aren’t people who would wantonly kill gays. Still, it’s a bit hard to believe that a missionary would commit a heinous crime purely as a result of the intellectual motivations of his church, especially since Lee isn’t a terribly complex villain. Instead, the book—despite its solid, simple writing and quick pace, perfect for a crime novel—focuses too much on digging through Mormon history and theology. Though interesting, it falls short when readers might be looking for more realistic characters and less didacticism. Nevertheless, overall, it’s a captivating, thought-provoking read, willing to deal with tough questions about the roots of evil.

An engaging though didactic tale of faith gone wrong.