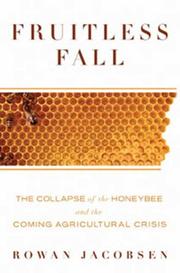 The Collapse of the Honeybee and the Coming Agricultural Crisis

Culinary writer Jacobsen (A Geography of Oysters, 2007, etc.) takes a laid-back yet terrifying look at the conundrum of Colony Collapse Disorder (CCD), which has devastated honeybees.

While CCD received media attention for its sheer weirdness, Jacobsen focuses on the larger ecological implications, particularly regarding the food chain. “80 percent of the food we put in our mouths,” he reminds us, “relies on pollination somewhere down the line.” While this delicate process is taken for granted in the era of industrial agriculture, it still depends upon the participation of surprisingly fragile insect populations. Indeed, one contributor to this fragility has been the industry’s reliance upon “busing” honeybee hives as rentals from farm to farm. CCD’s rise has been sudden, mysterious and brutal: By spring 2007, “the losses threatened an ancient way of life, an industry, and one of the foundations of civilization.” The author builds his narrative around beekeepers’ efforts to contend with CCD, beginning in 2006, when it became clear that their carefully managed hives were emptying out. Some force was disrupting the complex society of each hive, which divides pollination, honey-making and reproduction into regimented tasks. As beekeepers and scientists from all over the country shared their dispiriting experiences, they discerned that CCD attacked both hive behavior and the bees’ immune systems. Jacobsen identifies numerous potential culprits, all linked with the stressors created by the intersections of factory farming, globalization and the beekeepers’ craft. The suggestion that cell phones were to blame was debunked early; other possibilities, including pesticides, genetically modified crops and exotic maladies made resistant through cross-breeding, seem harder to dismiss. The author writes from a well-informed “green” perspective, in a breezy, humorous tone at odds with the ominous implications of his tale. For many readers, it may make the mystery of CCD easier to comprehend.

Intelligent, important assessment of a confusing phenomenon and its potentially catastrophic implications.