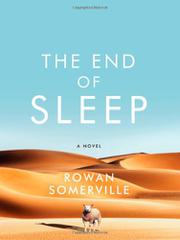 THE END OF SLEEP

In this engaging first novel from Ireland resident Somerville, a dissolute Irish journalist based in Cairo makes a last-ditch effort to investigate a story that just might salvage his career.

Badly hobbled in a bar brawl and subsequently fired from his job as senior reporter with the English language Cairo Herald (there are no junior reporters), Fin, who over the course of years has failed to patch together a meaningful life, ponders his next move in a squalid apartment. Drunk and desperate, he calls his only friend, Farouk, who responds like a brother, even though Fin a) is an infidel and b) has been out of touch for more than six months. Before the muezzins call the faithful to prayer at first light, Farouk’s chauffeur drags Fin out of bed and deposits him in Mena village, the furthest suburb of Cairo at the edge of the Sahara Desert, where Farouk lives in the shadow of the Great Pyramid. As their first cup of mint tea cools, Farouk begins to tell Fin about Skinhead Said, a neighbor who may have found a hidden tomb laden with treasures underneath his home. Fin believes this story may be his ticket back into journalism, but trying to get a straight story out of Farouk is like persuading him that religion is only a superstition. A desperate Irishman can be just as dogged as a proud Egyptian, however. Over the course of 24 hours, in an attempt to get the full story out of Farouk, Fin faces down a U.S. secret-service agent with a Rambo complex, a pint-sized king’s sadistic bodyguard and a prized Arabian stallion with a temper. Somerville successfully weaves details about local custom and cuisine into this humorous novel, which will at least leave readers eager to sample some Egyptian delicacies.

East meets West in this witty and warm picaresque.