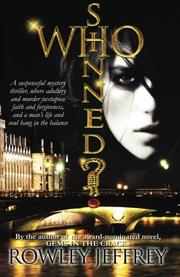 Finding both joy and sorrow in a complicated love triangle, three lifelong friends raise a child only to lose him years later to an unexpected killer in Jeffrey’s (Gems in the Cracks, 2008) latest novel.

Following the sudden murder of his father, a young John Richards finds soul mates in friends Gail and Tania, who help him cope with his loss. John’s mother calls them the “strays” and grows to consider the girls part of her family. But John—in love with both—must ultimately choose one over the other. In the end, he marries Gail. Years later, however, pained by her friend’s multiple miscarriages, Tania offers to be the surrogate mother for their child. “It was the solution, the only solution, and everyone was too happy and excited, too inebriated with hope, to entertain any notion of ulterior consequences.” As one might expect, old feelings and attractions emerge as John watches Tania carry his baby. A son is born, and Gail and John set out to raise a family. Sean, in some ways the child of all three of them, grows up healthy and happy, and Tania finds love with a successful surgeon. But after Sean goes missing before his big soccer game, he’s found dead, and his parents are in shock: “John lay on his back, looked at the ceiling with hope….Gail looked at the ceiling and saw no hope, just a darkness, a void that reflected the void and emptiness in her soul.” The novel builds tension by following the three confused and heartbroken characters, each of them struggling to understand their faith and their friendship. “God, Lady? God?” Sean’s killer asks Gail from his jail cell. “What God would let three innocent kids die?” Unfortunately, the Christian message is expressed via contrived spiritual metaphors and hackneyed existential dilemmas. For example, “John was still enwrapped in fancy…when the lights came on and it seemed like the morning of creation, not in brightness, but in splendour, as only the Master might have done it.” Spiritual overtones aside, the author paints a compelling—if sometimes melodramatic—picture of three humans coping with some of the worst tragedies life can offer.