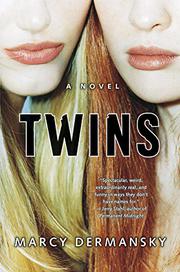 Dermansky’s first novel embraces and transcends the coming of age genre by overlapping the stories of twin sisters.

Adolescent twins Sue and seconds-older Chloe must pull away from each other, at least temporarily, before they can grow up. Cute blonde, identical daughters of workaholic, largely absent parents, they have spent their childhoods dependent on each other while ignoring their kindly older brother Daniel. At 13, Sue, smaller and less personable, goes to desperate lengths, including bulimia and tattoos, to hang on to her special twin relationship with Chloe. But Chloe, seemingly better adjusted, yearns to create an independent, more conventional life. Chloe becomes friends with popular, sexually predatory Lisa Markman, whose father is a retired basketball star. Angry and jealous, Sue breaks Lisa’s nose and bullies Chloe unmercifully through ninth grade. At fourteen, as their parents separate and drift even further out of their lives and Daniel heads off to college, Chloe begins to play basketball under Mr. Markman’s guidance. Jealous of both friend and father, Lisa shifts her allegiance to Sue who takes on a rebel outlaw identity in sharp contrast to Chloe’s jock persona. But then another shift occurs when Sue runs away to stay with Daniel’s college girlfriend. Befriended by the mysterious, beneficent Smita, Sue blooms into a healthy, creative high school senior. At home alone, cut off from Mr. Markman’s benign and fatherly support by her own father’s legal threats, Chloe begins to slide into Sue’s old identity. She quits basketball, takes a slacker boyfriend and nearly self-destructs until Sue reaches out. Chloe returns to basketball and both girls are able to see themselves more clearly together and apart. Dermansky gives her misfits real dignity and avoids psycho-social clichés—even the screwy parents are oddly believable—while she neatly captures the girls’ suburban high school world with every telling detail.