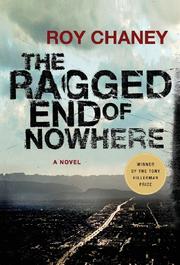 THE RAGGED END OF NOWHERE

What happens in Vegas gets buried in Vegas in Chaney’s debut.

In the years since the Hagen brothers were homeboys in Las Vegas, both have led colorful lives. Bodo’s been a Company man for his Uncle Sam in Germany; Ronnie, who never much liked their father, has chosen for complicated reasons to follow in the old man’s footsteps by joining the French Foreign Legion. A phone call from an old friend informs Bodo of Ronnie’s violent end. A mere five days after returning to Vegas, he’s been discovered in his car near Hoover Dam, a bullet in his head. Though the Hagen boys were never close, Bodo leaves Germany faster than a blitzkrieg. Doggedly, he sets about tracking down Ronnie’s killer in order to extract an eye for an eye. The exercise is obligatory but deceptively complex. What, for instance, is to be made of the so-called “Dead Man’s Hand?” Why is this unprepossessing wooden artifact worth so much to so many? Is it the stuff dreams are made of? And if shiftless, shifty Ronnie had indeed gained possession of it, how in the world had he done so? Bodo has lots of questions to put to an unsettling array of bloodthirsty people.

Too much back story, too much expository dialogue and not enough fire in the hero’s belly.