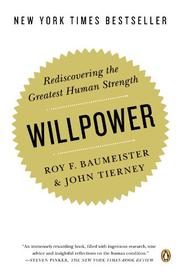 Baumeister (Social Psychology/Florida State Univ.; Is There Anything Good About Men?: How Cultures Flourish by Exploiting Men, 2010, etc.) and New York Times science journalist Tierney extol the practical wisdom, as buttressed by the findings of modern social science, of willpower.

It wasn’t long ago that the mantra “wretched excess is just barely enough” was on many American lips; but, write the authors, there is an old-fashioned virtue on revival: self-control. Without it, we are often prey to “compulsive spending and borrowing, impulsive violence, underachievement in school, procrastination at work, alcohol and drug abuse, unhealthy diet, lack of exercise, chronic anxiety, explosive anger.” Baumeister and Tierney use their appealingly upbeat voice to explain the intricate call-and-response between the failure of self-control and its problematical results, each feeding upon and reinforcing the other. Willpower is what we use to ward off disadvantageous temptations and desires, what allows us to monitor our behavior as social beings. It is also like a muscle in that it becomes fatigued through use and has to be replenished, most easily through sleep and healthy diet. However, even “if self-control is partly a hereditary trait—which seems likely,” it can be nurtured, and the authors submit a variety of tools to revivify self-control, such as setting standards and realistic goals, laying down “bright lines” and behaving consistently through establishing rules and regulations. There is an instructive chapter on the role of glucose in maintaining a vigorous self-control, commonsensical explorations into how self-awareness helps in self-regulation via self-consciousness—“that crucial task for a social animal: comparing our behavior with the standards set by ourselves and our neighbors”—and tricks to conserve the energy that willpower demands: precommitment (what Odysseus used to thwart the Sirens’ song), orderliness and lofty thoughts. Sewn into the social science are a number of engaging stories, from Eric Clapton to David Blaine to Mary Karr, that provide local color if not necessarily helpful roadmaps. Baumeister and Tierney afford readers numerous paths to put their feet on the higher ground of self-control, for “inner discipline leads to outer kindness.”