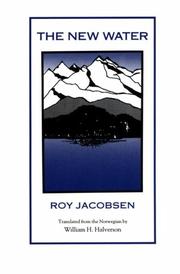 A claustrophobic and riveting psychological novel, the first English translation of a prizewinning Norwegian writer whose terse fiction has—perhaps inevitably—been compared to that of his great countryman Knut Hamsun. First published in 1987, this is the story of Jon, a withdrawn and apparently feebleminded young man who lives alone with his divorced elder sister on an island not far from the Danish mainland. Jon works first for a parsimonious neighbor and then for a company building an aqueduct and piping water to his embryonic ``community.'' But Jon's real life is enigmatically and disturbingly interior (``He was a sick man who lived in a sheltered world, among people who said they desired his best''). Jacobsen skillfully juxtaposes the secrecy and dissembling that are Jon's only defenses against the lies he tells himself and the ``visions'' he experiences. We're not sure until the final pages whether the disappeared Lisa, the companion of Jon's youth whom he's never stopped loving, did, as was reported, go to Copenhagen to become a ballet dancer—or whether Jon's insistence that he saw two men dumping a body into a lake explains her long absence. The possibilities are teasingly explored in a long, fascinating denouement in which police inspector Hermansen—a Javert to Jon's Valjean—patiently stirs up long-buried memories, and puts into orderly narrative form information previously given us only as fragments filtered through Jon's imperfect understanding. It's beautifully done, and the drama is significantly heightened by an accomplished translation that effectively sustains a powerful mood of uncertainty and hesitancy—the characteristics that happen to be the essential ingredients of its protagonist's inchoate personality. A superbly constructed thriller, and a memorable characterization of a man who scarcely knows himself whether he's hero, villain, or victim.