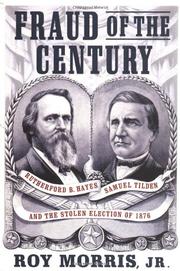 FRAUD OF THE CENTURY

Rutherford B. Hayes, Samuel Tilden, and the Stolen Election of 1876

A vivid past portrayer of such diverse Victorian personalities as General Phil Sheridan and Walt Whitman, the author here meticulously fleshes out the character and influences of the antagonists: Rutherford B. Hayes, the Republican Governor of Ohio, and Democrat Samuel Tilden, Hayes’s counterpart from New York. The contest, in the country’s centennial year, pitted an affable born politician and bona fide war hero (Hayes) against a bookish, lifelong bachelor barrister who had once dropped out of Yale because he didn’t like the food. Morris lets the reader smell the corruption accrued over 16 years of Republican administration, indelibly tarred as “Grantism” even though the two-term president in 1876 had never been touched directly by scandal. The wounded South still festered under Reconstruction, which brought carpetbaggers into sway in legislatures vacated by disqualified rebels, plus regular visits by federal troops anytime things threatened to get violent. In those days, the Democrats were the reformist party, out to curtail the size and power of the federal government while the entrenched Republicans strove to preserve and enhance it. Blacks in the South were free by decree only: armed white intimidators waited at the polls, and some local codes enabled the arrest for vagrancy of any refusing to work for their former masters at subsistence wages. The negation of Tilden’s eventual 265,000-vote plurality devolved into three southern states with Republican governors, and the fraud progressed from Florida (even then) to Congress and the Electoral College. By the time Morris documents the entire process, with Hayes’s victory declared official in February, democracy seems as dead as Wild Bill Hickok, gunned down that August in Deadwood, South Dakota.

One of the nation’s darkest chapters, brilliantly exhumed and analyzed with due attention to its obvious contemporary relevance.