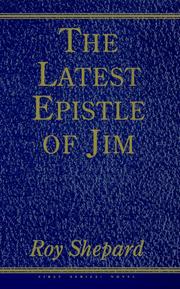 THE LATEST EPISTLE OF JIM

An old-fashioned debut, winner of Mid-List's national contest for first novels. Shepard's tale turns on a letter the Reverend Jack Andrews, pastor of a liberal church in a small midwestern town, receives in the morning mail but can't bring himself to open immediately. The letter is from the search committee of a much larger urban church and may contain a job offer. Shepard builds great suspense with this simple device, holding the reader's interest as Jack goes through the rounds of a typical day, officiating at the funeral of an elderly parishioner, stopping at the wake, all the while thinking back over his life. We learn of the disappointment his choice of a vocation caused his parents, of the bright hopes his wife had for her own career and of the way, in the small town in which they settle, those hopes have been stifled, while at the same time the decline of liberal denominations in general has also affected Jack's career. Jack, it becomes clear, is a good man, but afflicted with doubts. He had a brief, almost accidental affair long ago, and, though no one ever learned of it, it shook his faith to its foundations. So even though he is a careful pastor for his small flock and is generally liked, he also feels himself to be a hollow man, the central issue of his faith unresolved. The job in the big city would allow him to close out his career with the appearance of success, and his wife desperately wants to make the move as well. Good news comes by phone, bad news in another letter. Shepard masterfully manages events so that the reader is kept guessing, up to the climax, about the contents of the letter. The author, a minister himself, has created convincing, exact portraits of both Jack's life and of the little town of New Sharon. A fine, absorbing character study, modestly rendered but deeply felt.