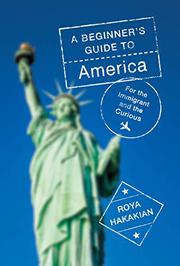 A BEGINNER'S GUIDE TO AMERICA

For the Immigrant and the Curious

The Iranian American poet, journalist, and immigrant offers a cleareyed introduction to America.

Hakakian, a Guggenheim fellow who has worked with the Council on Foreign Relations, the Wilson Center for International Scholars, and other organizations, delivers a book that serves as both a primer for immigrants and a knowledgeable alternative viewpoint on a fractured nation. The narrative is pleasingly intimate, as well, with the author speaking directly to “you,” not only exploring her own experiences, but also using the exercise to emphasize the shared anxiety faced by any stranger in a strange land. She breaks the book into two equally useful and thoughtful halves, the first of which tackles the hurdles of arrival in the U.S. From tense moments at customs and immigration to the overwhelming nature of shopping in the land of plenty to the woes of public transportation, Hakakian somehow manages to make the drudgeries of entry into a new culture both fascinating and frightening. In the second half, the author takes a more introspective approach and adds useful cultural and historical context to the experiences of immigrants when they arrive in America. This part opens with a long series of “lessons,” starting with love and sex and including segments on “The Vices and Virtue of an American Lover” and “Your First American Romance: A Few Warnings.” Equally reflective is the following series of essays on the diaspora and the disconnect between how things worked in your home country and how things work in the U.S. This is heavy stuff, not least Hakakian’s breakdown of the love-hate relationship between immigrants and their chosen country as well as a peek behind the curtain at “Anti-American Vitriol.” The author maintains a smooth narrative pace punctuated by intriguing anecdotes about everything from the first Persian to meet an American president to the biography of American asparagus.

An enlightening reminder about human rights and civic responsibility, all too relevant in a troubled time.