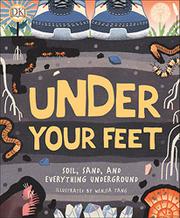 A view of the “important jobs” that soil and all the things that live in it have.

Considering the uncountable plants, animals, fungi, and microbes that live there, soil is a busy place—as the page design goes overboard in reflecting, with floating labels, teeming dollops of fact in diverse typefaces, snippets of photographs, and larger images done in a printlike style shoveled together in high-density arrays of angled or undulating lines on every spread. After opening with an overview of soil’s roles, particularly in regulating climate, the discourse plows through its organic and inorganic elements, how it varies in different environments, the living things that populate it, and, in broader context, how the dusty surfaces of the moon and Mars compare. Earthworms are such major players that they get two spreads of their own, six mentions of their “poop,” and instructions for setting up a catch-and-release “worm hotel.” Because the visuals are more about flash than furthering understanding, and the authors too seem bent on cramming in the dazzle (“Astronauts tried tasting moon dust!”), readers with a yen to dig deep may just scuff through this before going on to more fertile surveys like Marc ter Horst’s Hey There, Earth Dweller, illustrated by Wendy Panders and translated by Laura Watkinson (2019), or Tom Jackson’s Earth Sciences (2019).

Peeks under lots of rocks and logs but barely scratches the surface.