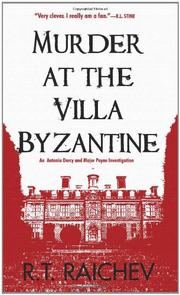 MURDER AT THE VILLA BYZANTINE

A messy beheading sends bantering sleuths off on another investigative romp.

Renowned mystery writer Antonia Darcy and her husband Hugh Payne, a retired major, barely know their glamorous neighbor, aging actress Melisande Chevret. All the more reason to accept an invitation to the birthday party that she's throwing for herself at her grand residence, Kinderhook. For Antonia, the party is a study in social awkwardness by the many inappropriate comments of surly teenager Moon, the daughter of Stella Markoff, a Bulgarian emigré. The matronly Stella is working with renowned writer Tancred Vane on a biography of Prince Cyril, the brother of the late King Boris. Other guests include Melisande's mousy sister Winifred, her fiancé James Morland and playwright and raconteur Stanley Lennox. The plot thickens when Morland throws Melisande over for Stella, then darkens considerably when Stella is beheaded in Tancred Vane's home, the Villa Byzantine. Knowing the reputation of the Paynes, Morland visits Hugh (Antonia is away in America) to ask for help, which is readily supplied. When Antonia returns, the sleuthing accelerates, punctuated with droll and often inspired exchanges between the couple. Also in the mix are Morland's athletic sister Julia Henderson and a strange elderly spinster named Miss Hope, who tells fanciful tales of royal Bulgaria and seems a magnet for trouble. A second victim hastens Antonia's path to a solution.