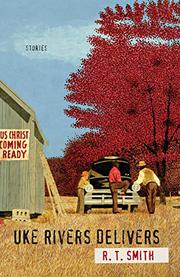 Fifteen stories rooted in Southern history, from a prizewinning poet.

Smith, editor of Shenandoah, has an ear for the Southern vernacular and a fondness for eccentric—if not grotesque—characters. All but one of the stories are monologues by the central figure, who is often a participant in some historical event. In “Trousseau,” one of Jefferson Davis's guards tells of the Confederate president's capture by the Union army, when Davis was reported to have been disguised as a woman. “Shooting Booth” is presented as a first-hand account by Boston Corbett, who killed Lincoln's cornered assassin. In “I Have Lost My Right,” the narrator meets a courier from Stonewall Jackson's command. Other stories look at history from a remove: “Docent” is narrated by “Miss Sibby,” who shows visitors Robert E. Lee's tomb on the grounds of Washington and Lee University, and the narrator of “Little Sorrel” reports visitations by Stonewall's ghost. Not all deal with the war. The title story is told by a midget ukulele virtuoso who discovers that his wife is unfaithful. And the opening story, “Jesus Wept,” is told by a farm boy whose father decides that God has spoken to him when lightning strikes their outhouse. Smith laces these stories with humor, often (as in “Docent”) at the expense of the heroic Southern tradition the narrators believe themselves to be upholding. The dialogue seems stilted at times, especially in the pieces with 19th-century settings, where it reflects the flamboyant rhetoric of that era. Still, combined with the author's fondness for sometimes arcane bits of lore—models of Martin ukuleles, or details of Jackson's campaigns—this tendency may limit readership. That would be a shame.

At their best, these flavorful pieces reside firmly in the tradition of great Southern storytelling.