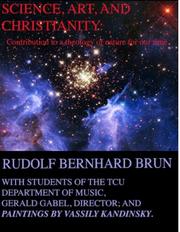 Contribution to a theology of nature for our time

by Rudolf B. Brun

A brief work that argues for the synthesis of Christian faith and scientific discovery.

Brun (Creation and Cosmology, 2009) attempts to square the circle of Stephen Jay Gould’s famous “non-overlapping magisteria”: the worlds of religion and science. He does so with intellectual rigor and a surprising amount of success, beginning with some fairly large ideological conceptions: “Any serious discussion between Christian theology and science must accept that nature is free to become itself,” he writes. “This is to say that there is no interference from supernatural entities into the natural creative process.” Modern physics, he observes, has demonstrated that physical laws are the results of the natural process, not the superimposed dictations of a “super-nature.” Brun’s view, which draws on the work of the famous Jesuit theologian Pierre Teilhard de Chardin, is that nature is the result of God’s Word, but it is also “free to become itself” without interference from supernatural forces, and that human science is also free to explore it. The author may run into trouble with more doctrinaire readers, not only for flatly declaring that all religions are human inventions, but also for exploring beliefs regarding God’s limitations; Panentheism, he says, believes that God is good and encourages good, but “cannot prevent evil from happening.” He also champions the notion of what he calls “syntheses” of the natural and the spiritual world, typified by the human drive to produce classical music or paintings, for example; the author’s side-discussion of the work of painter Wassily Kandinsky is quite engaging. Despite some distracting typos, the book’s arguments are persuasive. Ultimately, it asserts what many others have hopefully asserted before: that religion and scientific inquiry are only enemies when they’re being shortsighted: “Christianity has always adhered to the notion that faith must seek understanding,” Brun writes. “Therefore, Christian faith cannot ignore the understandings gained by science.”

A slim but powerful entry in the long-running debate between science and religion.