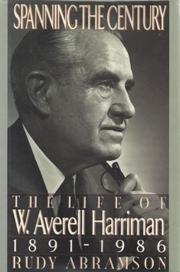 An absorbing account of the life of W. Averill Harriman, one of that remarkable group of ``wise men'' whose lives were so closely linked to the foreign policy of the postwar US as it emerged to world power; by a Washington correspondent for the Los Angeles Times. Harriman was the son of Edward Henry Harriman, one of the great railroad pioneers—some say robber barons—of the Victorian era. For much of his life, he lived in the shadow of his father, and—though Abramson does not say so directly—his efforts as international banker, railroad executive, early pioneer of aviation, and assembler of America's largest merchant fleet hardly showed the remarkable prescience that characterized his father's reign; moreover, in the Soviet Union during the 1920's and early 30's, Harriman was taken for a ride in business dealings. It may have been his lack of financial acumen that drove him into politics; in any case, FDR found this former Republican a useful weapon against the outraged financial community. Harriman's most glorious days came during WW II, initially as Lend Lease administrator in London, where he worked closely with Churchill to bring the US into the war. Later, this taciturn, often inarticulate man served as ambassador to Moscow and, in the 1950's, as a one- term governor of New York. In the 1960's, Harriman negotiated the neutralization of Laos and headed the American delegation seeking peace with North Vietnam. Abramson deals frankly with Harriman's contributions; his stinginess; his years as a playboy and his adulterous affair with Pamela Churchill, whom he later married; and his sycophantic, even groveling attempts to curry favor with successive Presidents and to secure interesting diplomatic and other assignments. An unusual perspective that conveys an impression sometimes closer to the court intrigues of the past than to the supposedly more rational politics of the present. (Sixteen pages of b&w photographs—not seen.)