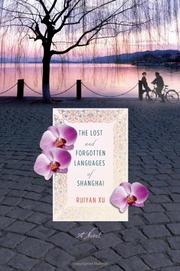 THE LOST AND FORGOTTEN LANGUAGES OF SHANGHAI

Silence—literal and figurative—is the topic of this debut novel in which an American neurologist helps a Chinese businessman regain his powers of speech.

While sharing a dinner at the Swan Hotel, Li Jing and his father are nearly killed in a gas leak explosion. Old Professor Li is weakened, but it is young Li Jing, a wealthy, charismatic businessman, who is transformed. Though he is able to understand written and spoken Chinese, he is unable to speak it himself, and instead can only mutter phrases in English, his first language. Li Jing was born and raised in America, but the widowed Professor Li moved the two to Shanghai when Li Jing was still an adolescent. Suffering from bilingual aphasia—with the irony that his “second” language is the one he has been using his whole adult life—the family offers a fellowship to American Rosalyn Neal to help rehabilitate Li Jing, in the hopes that in recovering the more accessible English, his Chinese will follow. Newly divorced Rosalyn is escaping her guilt and loneliness in Shanghai, and soon forms an attachment to the vulnerable Li Jing. Meanwhile, Li Jing’s wife Meiling must quit her job as a poetry editor and take over Li Jing’s investment business, an endeavor that keeps her away from Li Jing and creates a festering resentment between the two (though it is unclear why Li Jing can’t do his work with Meiling as his mouthpiece—a failing of the novel). The drama unfolds against the changing face of Shanghai, a place that is as mysterious to Rosalyn as it is now to Li Jing, isolated in his silence. Despite the broad sweep and the unusual circumstances, the novel turns into a story about a traditional love triangle—and they rarely turn out well.

Xu’s writing, precise and elegant, saves a too conventional plot.