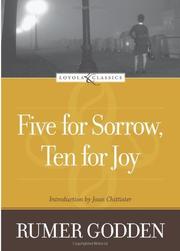 FIVE FOR SORROW, TEN FOR JOY

As readers of In This House of Brede (1969) may remember, Godden's nuns are models of spiritual might--wonders of humility, scrupulous self-discipline, common sense, and charity. And the religious community of the Dominicaines de Bethanie, Third Order of the Congregation of Saint Mary Magdalen, is charitable enough to believe that even in prisons there are true Magdalens with a ""vocation""; so the Order has among its members many former criminals. Lise, English-born and now heading toward her vows at age 37, is one of these--as we learn in flashbacks: she was a prostitute and madam lured into the profession by the sadist she never really stopped loving, Patrice, owner of a Paris brothel; but when Lise rescued the waif Vivi from the police, Vivi became Patrice's favorite, and Lise, attempting to save Vivi's marriage, shot Patrice. Now, after a long term in prison and through visits from the Dominicans, Lise has begun to understand her ""call."" Arriving at the convent, she is approaching her final vows through slow, often painful, ultimately joyful stages. But one final test awaits her: crazed Vivi will appear, attempt to kill Lise, and kill by mistake another new nun, also an ex-prisoner. Will Lise's faith remain secure? Of course--and Godden reaffirms her own faith in the convent joys: the beloved demands of the religious calendar; the simplicity and hard work of the day-to-day (sometimes hour-by-hour) regimens; the common courtesies and private meditations of serene and apparently flawless souls doing good and searching for clues to the Infinite. Not as grand or convincing a construction as House of Brede (Lise is a most unpersuasive prostitute), but pretty, soothing, and inspirational for those attuned.