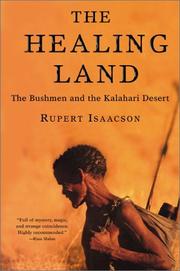 The Bushmen and the Kalahari Desert

Encounters with the Bushmen of the Kalahari, retold by journalist and travel writer Isaacson.

The Bushmen have been forced to move time and again, both within and outside their traditional lands. But, as Isaacson (The Wild Hunt, not reviewed, etc.) explains, they are currently facing a new threat, sort of their own private Highland clearance, as cattle ranchers fence the land they use, driving off or killing the game that Bushmen hunt for their livings. The Bushmen are perhaps the oldest surviving culture on Earth, so it isn’t surprising that they aren’t taking this state of affairs lying down. Land claims have been filed in the courts, and violent resistance has been resorted to. But suddenly the Bushmen must contend with a bureaucracy, and the methods of approach have caused crises and dissention in their ranks. There are quarrels between traditionalists and moderns and between young and old, the squabbling that comes with too much alcohol, the cultural anomie, the toll taken by years of genocide and degradation. Then again, Isaacson encounters the pure fabric of everyday resistance: Bushmen living by the hunt and women gathering foodstuffs, the dance and song that manage a cross-cultural leap and touch Isaacson’s soul. There are also the healers, shape-shifters, and mischief-makers, one of whom performs a healing dance for the author—and it’s impossible to doubt his feelings of bien-être after the experience. Isaacson polls the black ranchers, the remnant white population, and members of the game park profession, and he finds the whole range of feelings, from outright hostility to the Bushmen, through a bigoted paternalism, on to genuine respect. Isaacson reveals a world in flux and ready for new seismic shifts.

An expectant moment in the history of southern Africa—a whole culture’s survival hangs in the balance—portrayed by an author who digs enthusiastically for signs of a genuine persistence of the Bushmen.