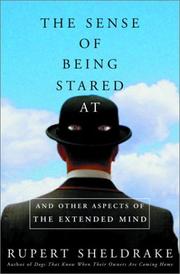 THE SENSE OF BEING STARED AT

and Other Aspects of the Extended Mind

Indefatigable seventh-sense investigator Sheldrake mines his earlier works on prescient and telepathic abilities to update followers on his latest data and theories.

Never had a sense of being stared at? According to Sheldrake (Dogs That Know When Their Owners Are Coming Home, 1999, etc.), this puts you in a minority—along with those who shrug off déjà vu experiences as coincidence, can recall many times when they thought of a long-lost friend who didn’t telephone soon after, or do not find Fido waiting patiently at the door when arriving at an odd hour. This is not to say that there aren’t seemingly paranormal events worth studying. Some animals do display disturbed behavior before earthquakes; herd/homing/flight formation and migratory behaviors of many species are impressive; social insects do seem to act as one body. However, science can explain at least some of these behaviors by detailing the exquisite sensory mechanisms of various species, including an awareness of magnetic fields, and acute olfactory, vibratory, or infrared sensibility, and probably more to be discovered. One does not have to resort, as Sheldrake does, to “morphic fields” that stretch out from one body to co-mingle with another (especially among people who are emotionally close) or invoke a new (actually old) theory of vision that recognizes the role of light entering the eye but goes on to assert that the eye then projects outward to create the visual world as we see it, a notion that affords the eye power to exert malignant influences (as in the “evil eye”). As always, there are reports galore of positive responses to questionnaires on what people believe, countless controlled experiments where the probability of the positive result occurring by chance is one in a zillion, and the favorite caveat is that if, for example, a staring experiment didn’t bear fruit it was because the starer was not very good.

Fodder strictly for the if-you-want-to-believe-it-it’s-true crowd.