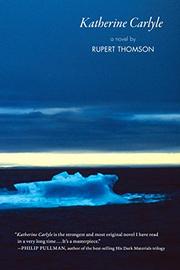 A young woman sets out to find the isolation she craves in Thomson's (Secrecy, 2014, etc.) picaresque novel.

The 19-year-old title character retains vague memories of being an IVF embryo. Her mother’s death and the perpetual absence of her father, a CNN reporter, contribute to a life in which being solitary is the natural state. To bring her physical circumstance into concert with her psychic state, Katherine, a few weeks before she's due to enter Oxford, cleans out her bank accounts and, without telling anyone, takes off for stark and increasingly bleak surroundings culminating in a remote island in northern Russia. Unlike the hero of her favorite film, Antonioni’s The Passenger, Katherine wants less to start over than to exist in a state of anonymity. For Thomson, Katherine’s quest is an understandable reaction to a digital world that’s both intrusive and disconnected. But though her voice achieves a consistent tone of blank angst, Katherine feels more a construct than a character. Worse, the intrusive passages in which she imagines her father’s attempts to find her threaten to make her flight seem an adolescent stunt. The finish, in which Thomson brings together all the book’s strands, is a technical feat and, because of the cruelty to which he subjects Katherine and the triteness of the denouement, both homiletic and sadistic.

A book that promises insight into the emotional detachment of our current technological overload should deliver more than the resolution of daddy issues.