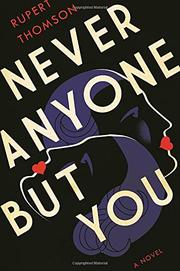 NEVER ANYONE BUT YOU

An intense clandestine love affair between two Frenchwomen during the first half of the 20th century spans art and literature, war and imprisonment, madness and devotion.

In his 10th novel, British writer Thomson (Katherine Carlyle, 2015, etc.) traces the intertwined biographies of two historical challengers of convention: Suzanne Malherbe, aka Marcel Moore, and Lucie Schwob, aka Claude Cahun. Their teenage attraction, which blossomed into adult love, was shielded by the fact that Suzanne’s widowed mother and Lucie’s divorced father fell in love and married, transforming the women into stepsisters. The daughter of a schizophrenic mother, Claude is impulsive and volatile, anorexic, sometimes suicidal, a cross-dresser who explores creativity in various forms, including acting and writing. Marcel, an illustrator and photographer, is the more grounded, less wayward of the two. After growing up in Nantes, the two women move to Paris in 1920, where they mingle with Dadaists, surrealists, and the avant-garde. Dalí makes an appearance, as do Hemingway, André Breton, and others. A sequence of holidays spent in the Channel Isles leads to a decision to move there in 1937, but the Nazi occupation in 1940 destroys the women’s idyllic life. For the next four years, Claude and Marcel perform their own acts of resistance, printing and distributing subversive leaflets, but their semi-creative actions lead to dark consequences when the Germans arrest, interrogate, and imprison them for months. It’s the war experiences of Claude and Marcel and their circle that strike the most memorable, penetrating note in this loosely spun account of bohemian choices. Thomson approaches the women’s story with poetic empathy, yet the result can seem scant and oddly paced, swooping in for consequential moments, then jumping ahead without connection. The effect is both beguiling and detached.

A real-life modernist relationship is revived with commitment if not quite enough conviction.