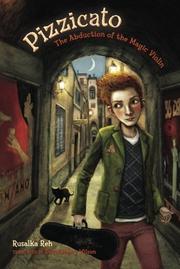 The Abduction of the Magic Violin

Well-worn character types and plot devices may earn the first juvenile title in Amazon’s new line of imports a little traction with fans of Cornelia Funke’s mysteries. Quintessentially meek orphan Darius Dorian looks upon an assignment to shadow violin-maker Archibald Archinola for two weeks as a welcome chance to escape his orphanage roommate’s bullying. Then Darius discovers that plucking a certain old violin in Archinola’s shop causes any wound or illness to disappear. He steals the violin and is subsequently kidnapped by a doltish con man and his termagant mother, who force his assistance as they set themselves up as miracle healers. Along with a relentlessly two-dimensional bully, Reh trots in a supporting cast led by Darius’ new Asian friend Mey-Mey (“the outer corners of her eyes bend upwards like the corners of a smiling mouth”), sets up a budding romance between the stuffy-but-decent Archinola and a local jeweler and ultimately sends the con artists packing. Despite potentially confusing bits—from repeatedly-mentioned “brown patches” on Mey-Mey’s neck and hand that turn out to be calluses rather than birthmarks to everyone’s sudden and inexplicable loss of interest in the violin’s magic at the end—the tale’s steady predictability will keep less-demanding readers engaged. (Fantasy. 10-12)