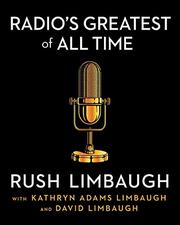 RADIO'S GREATEST OF ALL TIME

An unabashed celebration of the late talking head.

Rush Limbaugh (1951-2021) insisted that he had a direct line to God, who blessed him with brilliance unseen since the time of the Messiah. In his tribute, Florida Gov. Ron DeSantis calls him “the greatest broadcaster that [sic] ever lived.” That’s an accidental anointment, given checkered beginnings. Limbaugh himself records that, after earning a failing grade for not properly outlining a speech, he dropped out of college—doubtless the cause of his scorn for higher education. This book is a constant gush of cult-of-personality praise, with tributes from Ben Carson, Mike Pence, Donald Trump, and others. One radio caller called Limbaugh “practically perfect” and a latter-day George Washington by virtue of “the magnetism and the trust and the belief of all the people.” Limbaugh insists that conservatives are all about love, though he filled the airwaves with bitter, divisive invective about the evils of liberals, as with this tidbit: “to liberals, the Bill of Rights is horrible, the Bill of Rights grants citizens freedom….The Bill of Rights limits the federal government, and that’s negative to a socialist like Obama.” Moreover, “to Democrats, America’s heartland is ‘flyover’ country. They don’t know, or like, the Americans who live there, or their values.” Worse still for a money machine like Limbaugh, who flew over that heartland in a private jet while smoking fat cigars, liberals like Obama are “trying to socialize profit so that [they] can claim it”—anathema to wealthy Republicans, who prefer to socialize risk by way of bailouts while keeping the profits for themselves. Limbaugh fans will certainly eat this up, though a segment of the Republican caucus in Congress (Marjorie Taylor Greene et al.) might want to read past Limbaugh’s repeated insistence that “peace can’t be achieved by ‘developing an understanding’ with the Russian people.”