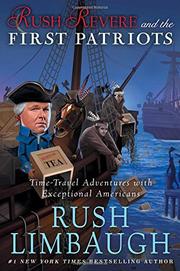 RUSH REVERE AND THE FIRST PATRIOTS

From the Rush Revere series, volume 2

It hasn’t been long since Rush and Liberty took students Tommy and Freedom to Plymouth Plantation (Rush Revere and the Brave Pilgrims, 2013), but they are stoked for more time travel when the unorthodox substitute teacher returns. This time, he includes new student Cam, an African-American military child, and blonde queen-bee Elizabeth in his hops, taking various configurations of the foursome to a handful of places and times between 1765 and 1774. Oddly, though Rush’s namesake’s famous ride is referenced, they do not travel to witness it. Other missed opportunities include a visit to chat with Patrick Henry, though not to hear his “Give me liberty or give me death” speech, and a trip to Philadelphia to stand around outside Carpenters’ Hall while inside, the First Continental Congress debates severing trade ties with Great Britain. As before, blithe disregard for the basic conventions of time-travel fantasy and leaden, amateurish prose characterize the effort. A surfeit of exclamation points (seven in one paragraph at one point) fails to compensate for the text’s inveterate tendency to tell, not show. Characterizations are particularly weak; Elizabeth is an extreme cartoon of a brat, and Cam displays bizarre equanimity at being assumed a slave. Rush himself and Liberty are as affable as ever, though. Readers interested in the received narrative of the lead-up to the American Revolution would do much better to look for the old Landmark books in their local libraries.

What’s next? Probably an equally maladroit series of trips to the Revolutionary War itself.