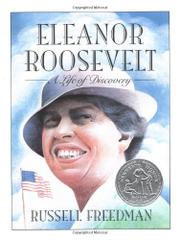 A Life of Discovery

A timid child from a dysfunctional family, Eleanor Roosevelt became a courageous woman whose career was propelled by a series of devastating events: FDR's polio, his relationship with Lucy Mercer, his election to offices that doomed his wife to supportive roles, his death; each time, with energy, determination, and an eye for the essential, Eleanor found new outlets and broke new ground with her accomplishments. Giving up her Democratic Party office when FDR was elected governor, she became his eyes and ears—a role she expanded as First Lady, touring the country and the world to observe and ask questions, winning over critics, reporting, advising, and acting as bellwether for forward-looking ideas on social policy and women's rights. After FDR's death, she chaired the UN commission that drafted the Universal Declaration of Human Rights. And always, she wrote—articles, books, a daily column; presided over a large family with its share of troubles; and kept in touch with an ever-growing circle of close friends. In this generously full history (longer than his Franklin Delano Roosevelt, 1990, and with more numerous, equally fine b&w photos), Freedman focuses, properly, on the public life more than the personal one, as Mrs. Roosevelt herself did. Even so, synthesizing a wealth of resources (ably surveyed in a descriptive bibliography), he brings her wonderfully to life as a rare blend of honesty, intelligence, deep concern for humanity, and ability to inspire loyalty and convey her ideas. Freedman at his best: a splendid achievement. (Biography. 10+)