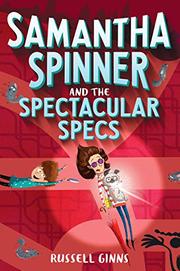 SAMANTHA SPINNER AND THE SPECTACULAR SPECS

The further adventures of Samantha Spinner involve rubber-nosed clowns, a gross of chinchillas, and a Broadway play.

In the first installment of their search for their missing uncle Paul, Samantha Spinner and the Super-Secret Plans (2018), 11-year-old Samantha and her annoying little brother, Nipper, traveled to France, Italy, and Egypt. They didn’t find their uncle, but they outwitted an organization called the Royal Academy of International Ninjas (RAIN). Here, they visit Mali, Indonesia, and Peru, using supersecret underground transport, and take a train to New York to see the opening of older sister Buffy’s Broadway play, all the while trying to avoid the clowns of the Society of Universal Nonsense (SUN). The narrative in this second series entry includes explanatory background, but the Spinners’ adventures are so bizarre that new readers may find it hard to catch up. Still, fast-paced action and zany humor could keep them turning pages anyway. Samantha is clever and focused, Nipper impulsive and impatient (his impulsive, unintentional purchase of 144 chinchillas is dealt with by the Komodo dragon he brings home); both contribute to finding clues and occasionally ignore what readers will see as obvious. With no physical descriptions, they’re presumably white, which is confirmed on the cover. Interspersed in the narrative are more supersecret plans—of the Borobadur Temple, fire hydrants, accelerated moving walkways, the Great Mosque of Djenné, Lucy the Elephant, and the USS Intrepid. All but the elephant have roles in this adventure—perhaps she’ll appear in the next book.

A cliffhanging conclusion will ensure that readers who’ve enjoyed these improbable tales will be impatient to find out about the WIND.