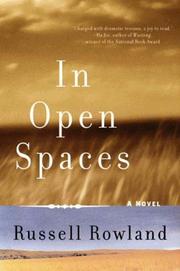 A heartfelt debut in which a Montana ranch family battles both Mother Nature and human nature.

It’s punishing country, southeastern Montana: choking dust-storms, killer droughts, merciless winters, and a population that puts on pessimism like an extra layer of clothing. Sensing he’s in danger of becoming typical, young Blake Arbuckle fights against it, wants something better for himself but has no real idea what it might be. The time is the early part of the 20th century, and when we meet the Arbuckles (loosely based on the author's grandparents) they’re attempting to cope with the tragic drowning of Blake’s older brother George. But it’s worse than that. The excruciating thing, the thing that brings despair chillingly close, is the growing sense among the family that the death might not have been accidental. Jack, the oldest brother, who was with George when he died, is undeniably shaken by what happened, by whatever it was that happened, but enigmatic Jack is hard to read. And it’s a given that there was little love lost between the two brothers. With everything still unresolved, Jack suddenly disappears—without explanation. And then, months later, just as suddenly, he reappears. He’d enlisted in the AEF, he tells the bewildered Arbuckles, been shipped overseas to France, wounded there, and now, a civilian again, has a brand-new wife he wants the family to meet. Rita is sweet-natured and pretty, and the Arbuckles are warmly welcoming. As for Blake, he’s overwhelmed, “engulfed” by her. For unsophisticated, bone-loyal Blake—a portrait rendered with particular sympathy—that simply means he’s hers forever. All the portraits are convincingly drawn: the silent, drudgery-shaped father, the indomitable mother, the often contentious brothers—Blake aside—and, most vividly, the bleak, cruel land, making incessant and impossible demands on those who love it despite themselves.