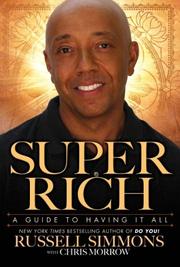 A Guide to Having It All

by Russell Simmons with Chris Morrow

The “godfather of Hip-Hop” shares the secrets to cultivating a bountiful, carefree life.

In an uneven but spirited follow-up to his 2007 self-help guide Do You!, the co-creator of Def Jam Records and a cavalcade of lucrative multimedia ventures extols the virtues of living a “super rich” life unencumbered by “toys” and their “clutter.” Sure, extraneous physical objects are to be enjoyed, he writes, but never to become attached to; becoming spiritually “enlightened” will make those possessions immaterial. Simmons ascribes spirituality to personal wealth rather than monetary affluence and believes that true happiness is “actually a state of needing nothing” except “being conscious and connected to God.” Recounting his own rocky road to success, the author notes that in order to be successful, the heart must be present in every endeavor, and talents should be given away for free in order to attract attention. Significantly influenced by yoga, Simmons lets the Buddhist quotations, mantras and parables flow freely. The author encourages significant time commitments to meditation and nurturing “stillness,” while denouncing neediness and “uninspiring actions” like smoking cigarettes and meat consumption. Collaborating with journalist Morrow, Simmons employs many examples from his career and personal struggles to create a platform based on sensible guidance and responsible, timeless ethics. Still, despite the universal messages, and his insistence that he is not attempting to convert anyone, the author’s endeavor to “write a book where yoga, philanthropy, and God played a major role” may alienate those of different affiliations. The author’s at his most convincing when delivering jaunty, positive messages about achieving personal fulfillment through patience and hard work—e.g., “you should take great comfort in the knowledge that each sunrise presents another day to do things right.”