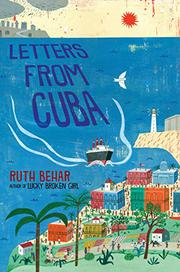 In 1938, a Jewish refugee from Poland joins her father in small-town Cuba.

After three years abroad, Papa’s saved only enough money to send for one of his children. Thus Esther boards the steamship alone even though she’s not quite 12. Cuba is a constant surprise: Her father’s an itinerant peddler and not a shopkeeper; they live as the only Jews in a tiny village; and she’s allowed to wear sandals and go bare-legged in the heat. But the island is also a constant joy. Nearly everyone Esther meets is generous beyond their means. She adores her new trade as a dressmaker, selling her creations in Havana to earn money to bring over the rest of the family. In glowing letters to her sister back in Poland, Esther details how she’s learning Spanish through the poems of José Martí. She introduces her sister to her beloved new friends: a White doctor’s wife and her vegetarian, atheist husband; a Black, Santería-following granddaughter of an ex-slave; a Chinese Cuban shopkeeper’s nephew. Esther’s first year in Cuba is marked by the calendar of Jewish holidays, as she wonders if she can be both Cuban and a Jew. As the coming war looms in Europe, she and her friends find solidarity, standing together against local Nazis and strike breakers. An author’s note describes how the story was loosely inspired by the author’s own family history.

Warmhearted cross-cultural friendship for a refugee on distant shores: both necessary and kind.