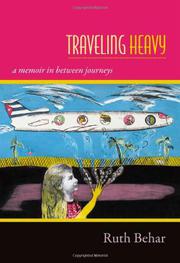 A Memoir in Between Journeys

A Cuban-born academic re-creates a moving emotional journey from Cuba to America.

A cultural anthropologist whose first love was writing poetry and fiction, Behar (Anthropology/Univ. of Michigan; An Island Called Home: Returning to Jewish Cuba, 2007, etc.) is a stylish writer. Her probings about her complicated Jewish Cuban ancestry and family’s immigration to America mine compelling, relevant issues about identity and belonging. Her love of travel first took root at age 5 with her emigration from Havana with her mother, father and small brother in 1962. The family settled in the Ashkenazi section of Forest Hills, Queens, making ends meet selling “fabric, envelopes and shoes.” The young author was thrown, sink or swim, into first-grade, though she knew no English. Bookish and assertive, Behar wanted to pursue her education despite the injunctions imposed by her authoritarian father, and she eventually became a cultural anthropologist, able to use her Spanish for field work among farmers in Spain and Mexico. Her essays meander among these decisive events of her life, circling always back to the place where she began and longed to return: Cuba. She was able to return to her homeland in various capacities over the years, especially as a visiting academic. In “The Freedom to Travel Anywhere in the World,” Behar delineates the glaring discrepancy between her own privileged comings and goings from Michigan, with suitcases laden with plentiful American products, and the dire shortages of and restrictions on her friends and family in Cuba. Yet always, touchingly, she is accorded by her compatriots “political innocence, [and] welcomed with tenderness.”

A heartfelt witness to the changing political and emotional landscape of the Cuban-American experience.