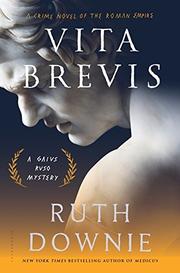 A Crime Novel of the Roman Empire

An idealistic doctor who moves to the big city with his family finds a nest of corruption—and corpses—literally on their doorstep.

Now that it’s C.E. 122 in Imperial Rome, physician Gaius Petreius Ruso is starting a new chapter in his life, moving from Britannia with his wife, Tilla, and their young adopted daughter, Mara. The trip has been arduous, with Metellus, a longtime antagonist of Ruso, popping up in Rome to insult Tilla and Mara. Ruso is set to take over the medical practice of the venerable physician Kleitos, but when they arrive at the older man's home, the door is locked, and when they get inside they find the furniture, including Kleitos’ medical items, missing. On the porch sits a big barrel. Opening it with difficulty, Ruso finds a corpse inside. Nevertheless, he begins seeing patients even as he turns some attention to solving the dual mysteries of the corpse and his predecessor’s disappearance. Helping not one iota is wealthy Accius, Kleitos’ patron, who peppers Ruso with annoying questions and dire reports of local unrest. He finds the locals similarly prickly, and Tilla fares no better in Rome’s rough streets, though a resourceful new servant girl named Narina proves an invaluable ally. The couple’s exploration of this alien city becomes the reader’s tutorial as well. They begin to feel that they are under siege. Could the unexpected death of their landlord, Horatius Balbus, be connected to these other mysteries?