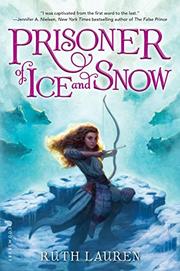 PRISONER OF ICE AND SNOW

There’s some nice bending of gender tropes right from the start: Valor has the excellent archery skills of her mother—the omnipotent queen’s first huntswoman—and Sasha, poised to be the princess’s adviser, has the intellectual skills and interests of their father—the queen’s top political adviser. Valor’s entire family has been disgraced by Sasha’s imprisonment for allegedly stealing a politically important music box, although the object has not been recovered. In order to free her sister, Valor deliberately gets herself arrested and sent to Tyur’ma. Valor relates the action-packed, suspenseful tale in present tense. Her first hours at the juvenile hall from hell convince her that she must trust a few other inmates to help with her breakout plans. Enormous, tattooed guards called Peacekeepers, a warden whose eyes and personality match the icy landscape, ferocious wolves, heart-racing action scenes, and frequent, impossible brushes with death give the text a feeling of fantasy, although there are no allusions to magic. Valor is both true to her name and resourceful. She also humbly acknowledges her shortcomings, especially errors in judgment, as the plot twists and turns. The satisfying ending includes an easy lead toward a sequel: the real music-box thief has suddenly disappeared. Russian names and words are abundant; the world appears to be populated by light-skinned characters.

A page-turner with an intrepid protagonist.