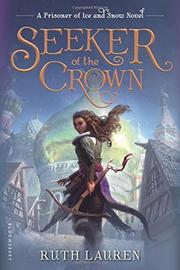 SEEKER OF THE CROWN

From the Prisoner of Ice and Snow series, volume 2

Thirteen-year-old twin sisters Valor and Sasha have barely agreed to missions from Queen Ana when the queen herself vanishes—in broad daylight.

As in series opener Prisoner of Ice and Snow (2017), Valor, the narrator, is brave and impetuous—full of ideas that may or may not work—and Sasha, like their father, is bookish and better at diplomacy. Logically, their missions vary. Valor’s is to recapture the escaped Princess Anastasia—whose sinister behavior had previously led to Sasha’s wrongful imprisonment in the dreaded Tyur’ma. Sasha’s mission: reforming that prison. First, along with fellow escaped inmates Feliks and Katia, the girls find a way to release the wrongly held Prince Anatol, Anastasia’s brother. Their world turns upside down when they must turn their attention to finding the queen. Then the plot twists and turns as often as the brave little band of friends twists and turns through secret corridors in, under, and above grand marble institutions and dark alleyways alike. Moscow-like Demidova and its surrounding, cold-climate environs (populated by an all-white cast with Russian names) are brought to life through Valor’s observations. Feliks and Katia bring both subtle humor and questions about class distinctions to the text. References to women as scholars, prison guards, and rulers abound in this thrill-a-minute adventure story, which gracefully recaps Book 1. The end both satisfies and leaves space for a sequel.

There is no magic, per se, but the book is otherwise true to the best fantasy traditions for preteens.