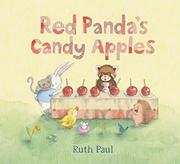 Who can resist candy apples? Not Red Panda.

The animals from Hedgehog’s Magic Tricks (2013) return for a new adventure, this time featuring Red Panda. He’s selling candy apples that he made himself. Rabbit is his first customer, but Red Panda is sad to give the apple to him as he realizes he’d rather eat it himself. Selling candy apples is not as much fun as eating them, it seems. Hedgehog is next, choosing Red Panda’s favorite. Mouse is next. With his coin jar filling up, Red Panda treats himself. “Lick, crackle, crunch.” Now only one candy apple is left for sale, but Duckling and Bushbaby each want one. Luckily, Red Panda has stashed another one for himself, so everybody gets an apple. In a real breach of the author-reader contract, this last apple appears only when Paul needs it. Although red pandas and bushbabies are likely to be new to most North American children, they likely won’t care, as details in the illustrations flavor the story. Reddish crumbs are stuck on whiskers, and animal friends are dressed in clothing, with the white mouse in a pink tutu and Red Panda in red plaid pants. Despite the sweet flair of the pencil-and-digital artwork, though, the story doesn’t have much bite to it.

The message appears to be the treats are best when shared, which makes Red Panda’s attempt at entrepreneurship all the odder.