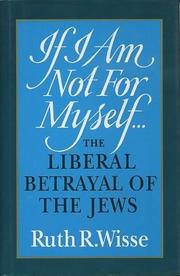 The Liberal Betrayal of the Jews

Furious blast at anti-Semitism and the liberals who tolerate it. Wisse (Yiddish Studies/McGill Univ.) casts her study as a love letter to a fictional ``B'' in order to overcome the ``humiliation'' and ``exhaustion'' she feels when writing about anti-Semitism—but this device does nothing to soften her rhetoric or to cloak her rage. Anti-Semitism, which Wisse calls ``the most durable ideology of the twentieth-century,'' seems to be on the rise in America (see William Buckley's In Search of Anti-Semitism—reviewed above) and the world. Who's to blame? Among the most culpable, says Wisse, are non-Jewish liberals who ``sacrifice Jews to liberal pieties.'' Because of their belief in rationality and progress, Wisse argues, these liberals find anti-Semitism ``unthinkable'' and thus fail to see it when it appears in modern form, such as in opposition to the state of Israel (i.e., the ``demonization'' of Israel in the liberal media). Liberal Jews are guilty as well, for playing ostrich or, even worse, for self-hatred that leads to abetting the enemy: Noam Chomsky's anti-Israel stance is cited as ``a sublimating attempt to get beyond the condition of Jewish specificity once and for all.'' Franz Kafka, Isaac Babel, and Irving Kristol win Wisse's approval for giving anti-Semites no ground, while Amos Oz is the most prominent Jewish writer to suffer her wrath. But Wisse saves her strongest venom for the Arabs, whom she accuses of ``holding Jews responsible for the crimes they intended to commit against them.'' She scores points when noting Arab mistreatment of Palestinian refugees and PLO diplomatic duplicity, yet too often her own crude anti-Arab bias clouds her arguments (for instance, in stereotyping Arabs as ``an imperial people contemptuous of weakness''). Well-argued agitprop but tainted by the very sort of bigotry that Wisse decries. Nonetheless, an important book, likely to generate intense discussion.