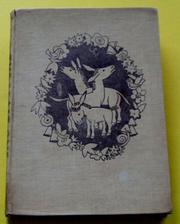 It takes a very special sort of skill to interweave fantasy and realism and Ruth Sawyer has that skill. She takes here a story of a Mexican lad and his deep devotion to the tiny burro, his whole aspiration centered around the faith in his own patron saint who was also the patron saint of living creatures, and his belief that this saint would give him the burro as his own. His father saw the burro as a potential beast of burden — and on the day he put him to work, the dark powers of evil turned the little burro into a creature of wook. How the wood burro became a symbol of his wish for the lad, and how he put all his earnest efforts into achieving that wish make the final miracle seem credible. A story that might, perhaps, be better read aloud or told to children, since vocabulary and thought seem frequently above the age level of the interest.