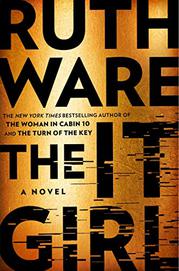 Ten years after having discovered her Oxford roommate’s dead body in front of the fireplace in their room, a young woman struggles with the realization that she may have helped send the wrong man to prison.

Hannah Jones arrives at Oxford hardly believing that she’s been accepted into this haven of learning and wealth. Sharing a picturesque set of rooms with the flamboyant and beautiful April Clarke-Cliveden, she divides her time between rigorous studying and energetic socializing with Emily Lippmana, Ryan Coates, Hugh Bland, and Will de Chastaigne, with whom she shares an attraction even though he's April’s boyfriend. It’s a good life except for the increasingly creepy interactions she has with John Neville, one of the porters. When Hannah finds April dead one night just after she’s seen Neville coming down the stairs from their rooms, it’s her testimony that puts him in jail. Ware divides the novel into alternating “before” and “after” chapters, with the narrative of Hannah’s college experience unfolding parallel to the events of her life nearly a decade later, when she’s married to Will and pregnant with their first child. Then Neville dies in prison and Hannah hears from a reporter who thinks he might actually have been innocent. Hannah begins to wonder herself, and she plunges back into the past to see if she can figure out what really happened that night. As usual with Ware, the novel is well crafted—the setting, characters, and dialogue are all engaging—but it lacks the author's signature sense of urgent and imminent threat. The novel unfolds smoothly, providing a few twists and turns, as the reader might expect, but not really delivering any true suspense. It also lacks the contrast between a luxurious background and the characters’ fears that Ware has often played to great effect. She does offer a deeper dive into the trauma of the survivors than she usually does, but this isn't the breathless page-turner one has come to expect from Ware.