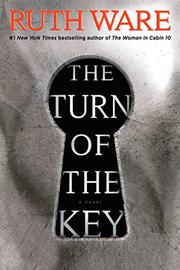 THE TURN OF THE KEY

Ware (The Death of Mrs. Westaway, 2018, etc.) channels The Turn of the Screw in her latest creepy mystery when a nanny takes a post at a haunted country house.

Traveling to Heatherbrae House to interview for a nanny position, Rowan Caine finds a gorgeously redone Victorian mansion nestled in the remote Scottish moors. Sandra Elincourt is stylish and smart, and the girls seem sweet enough, though 8-year-old Maddie rings some alarm bells in Rowan’s mind. So what if the last four nannies left under mysterious circumstances? Rowan knows she’s where she belongs—even when Maddie tries to warn her away, claiming that “the ghosts wouldn’t like it” if she stays. On her first day, however, Bill Elincourt makes a pass at her, and then both parents leave on a business trip, planning to be gone for at least a week. Left alone with the three little girls, Rowan can’t shake the feeling that there are other forces at work in the house. When strange noises begin to wake them all in the night, it seems like the house may indeed be haunted. What happened to those other nannies? Why is Maddie intent on getting Rowan fired? Why is there a garden of poison plants? And who wrote “We hate you” all over the attic walls? Ware excels at taking classic mystery tropes and reinventing them; her novels always feel appealingly anachronistic because while the technology is 21st century, there is something traditionally gothic about the settings, full of exaggerated luxury and seething dark corners. In this case, she reimagines the Victorian ghost story, with Henry James the most obvious influence not just on the plot, but also on the narrative frame, as the story actually takes the form of a letter written by Rowan to her solicitor as she sits imprisoned for murder. Regrettably, the novel’s ending leaves a few too many loose ends while also avoiding the delicious ambiguity of its Victorian predecessors.

Truly terrifying! Ware perfects her ability to craft atmosphere and sustain tension with each novel.