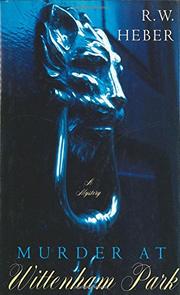 Being a peer isn't what it used to be. Now that their Oxfordshire estate has fallen on hard times, Lord and Lady Gilroy have had to fall back on a series of increasingly desperate money-making schemes. Their latest, an Agatha Christie weekend with eight guests and a fictional murder, nearly founders before it's launched when the Christie estate forbids the use of any of the old inventer's plots or characters. Luckily, none of the guests—decorous stock characters, all of them, though duly equipped with the modern complement of nipples and thighs—is terribly disturbed by Lady Deirdre's last-minute substitutions, since they all have their own fish to fry: an adulterous affair, an article for a true-crime magazine, an attempt to strong-arm Lord Algernon into parceling out the estate for a subdivision of homes. For a while, Lady Deirdre and her first-time author have fun confusing fictional threats with real ones, but once the two murders, fake and real, are discovered, everything that follows- -despite the local inspector's sage observation that ``few things about the Wittenham Park murder seemed to be normal''—is utterly predictable. A miasmal lack of surprise will dampen the weekend for all but the staunchest nostalgia buffs. If only the Christie estate had relented and allowed a dollop of Agatha's surpassing ingenuity.