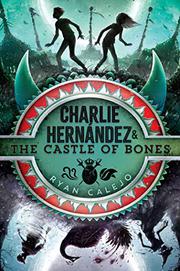 CHARLIE HERNÁNDEZ & THE CASTLE OF BONES

From the Charlie Hernández series, volume 2

Charlie and his best friend, Violet, return, this time to save the Witch Queen of Toledo—who may not need saving after all.

Since readers left him in Charlie Hernández and the League of Shadows (2018), Charlie has been trying to improve his control over his morphling powers, which allow him to manifest as different animals. His adult handler, Queen Joanna, is supposed to be there to help him, but one day he and Violet find she has been kidnapped, so they take it upon themselves to rescue her. The clues she seems to have left behind lead them to Brazil and beyond; just as in the first installment, they dodge gods, beasts, and monsters of Iberian lore and legend along the way. Mexican-American Charlie is able to identify the creatures they find as they traverse South America (thanks to some magical modes of travel) while white-presenting Violet is the mastermind who figures ways out of tricky situations. Predictably, they get out of all the traps they find themselves in, but that doesn’t mean there aren’t truly gruesome and scary events along the way. Spanish and Portuguese are unitalicized and, thankfully, not translated in line but rather left to context. Oddly, Brazilian trickster god Saci peppers his sentences with a fair bit of Spanish, even at times when it seems more linguistically logical to use Portuguese. Readers who have not read the first volume should not have trouble catching up, but it does require quite an attention span to keep track of people and events.

Well worth it for ravenous fans of quest stories.